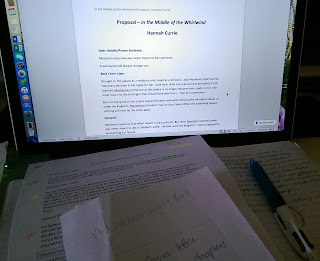 (NB. Here's 'Til You Find Your Dream for those who missed Part One of the story)

My girls love watching the movie ‘Inside Out’. Personally, I can’t see what they see in it. I find it frustrating and annoying. And I think the writers missed out one major character in the ‘mind’:

Alongside Joy, Fear, Anger, Disgust and Sadness, they really needed a character called Determination. Or maybe I’m just biased, because that particular emotion is what gets me through 95% of my days.

And the last five years of waiting to see my dream of being a published author become a reality.

Growing up, I never saw myself as particularly determined. I was probably more on the lazy side of the equation, especially when it came to creativity. I loved creating – music, artwork, stories, projects – anything and everything. But if it didn’t reach my expectations the first time, I struggled to keep going with it.

I play viola and remember once when my usual teacher was away for six weeks or so and I had a substitute. She came recommended and I’m sure she was brilliant, but all I remember about that six weeks was playing one song. And only one song. Over and over again. A really thrilling (insert intense sarcasm here) piece called ‘Long Long Ago’.

I played it fine the first time, but it wasn’t perfect, so she made me practise it for a week. I did. The second week was about the same. Good, but not perfect. The teacher set the same song as my practise for six weeks. And by the sixth week, it was terrible. I’d lost all interest in the song and no amount of practise was going to improve it. I had neither the patience nor the determination to get it perfect.

Admittedly, I was only around seven or eight years old at the time but that was pretty much me. Though I excelled at school and took great pride in my work, I’ve never been a perfectionist. Nor have I handled rejection well.

I sent out my sixteenth book proposal to a literary agent last night. The fifteen previous to that one (alongside those I naively sent to actual publishers before I had any idea what I was doing) have all been rejected. On paper, it looks like I’m no closer to reaching this dream of mine than I was five years ago when I started. I might have written five books but none of them are even close to being published. I should feel like a failure. Maybe even admit that it’s time to give up.

That is sooooo not happening! Every day that passes, I am just more determined to see this through. And the truth is, I am a lot closer than I was five years ago.

Since agents receive piles of book proposals every day, most of them only reply to those they are remotely interested in. Even rejections. When I first found the courage to start sending proposals and queries out to agents, there was a lot of silence.

Then gradually, I started getting some actual replies. Mostly along the lines of ‘we like the idea but your writing isn’t strong enough’ which, at least, gave me something to work with. So I did. And when I next sent it out, the replies were even more encouraging, though still rejections.

And then, finally, I thought I was almost there. An agent showed real interest in my manuscript. We emailed back and forth for six months or so last year, with my proposal going from one level of review within the agency to the next and being polished further each time. The book as well, as it got a 20000-word update to make it more marketable. I didn’t want to get my hopes up, but I was pretty excited.

Mid-March this year, they finally said no. I should have been devastated and I would have been –  if not for the encouraging email they sent along with the rejection. They really liked the manuscript and didn’t want to let it go but just couldn’t find a place for it within their current list of projects.

I never thought a rejection could feel so encouraging. This time, it wasn’t my writing that was the reason. It was just a matter of timing.

I’m giving that book/series a break for a bit, but am certainly not giving up on it forever! I’ll come back to it because I know it’s something God wants to encourage others with – further afield than just those around me who’ve read it.

But for now, I’m sending out proposals for a different book. A Young Adult one I’ve written rather than the historical fiction series. Different genre, different style of writing, same passion to show women that there is hope in this world – no matter how dark their worlds may feel – because God loves them.

It might not look to anyone else like I’m any closer to getting my books published than I was five years ago, but I am. I can see God’s hand on this dream from the start and know he’s far from finished with it. Or me.

Every day, I am one day closer to seeing it realised. And that totally excites me.

I hope it does you too.

Maybe your dreams look as dry as mine at times. Maybe you’re feeling low on determination. Maybe you’re wondering if it’s time to give up and let it go.

If God has placed a dream in your heart, hold on to it with all you have. And know that He is too. You’re not alone in this. God is with you every step of the journey and is working in ways, and other people’s lives, to make it happen which you might not see evidence of for years yet.

I cannot wait for the day when I get to share with you the news that I have a book in the process of being published. It’ll happen. The day will come.

And I know it’ll be all the more precious because of the waiting.

Posted by Hannah Currie at 13:30 No comments:

A Time to Cry 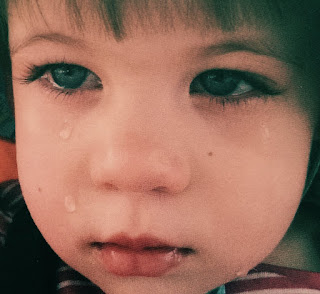 Growing up, I was certain every mother had this one particular superpower. They knew their child’s cry. Seriously, it was uncanny.

For a number of years after finishing high school, I spent every Friday morning hanging out (alongside a few other adults) with between twenty and thirty kids under the age of five while their mums attended a Bible study. It was fun. It was crazy. And – with kids that young – there were the inevitable meltdowns.

It utterly amazed me. All the cries sounded the same to me and yet, even from three rooms away, with that many kids in the building, a mother could know without a doubt that that was their child crying.

I still don’t know how it works, but it does. Now I’m one of the mums at Bible study, and yep, I can tell when it’s my child crying. I can’t explain the difference, but like an individual’s voice, their cry is unique.

We try to hide our crying better as adults. We think it’s unacceptable somehow, or perhaps we just don’t want people to ask questions we don’t want to answer. But the tears are still there. The tantrums. The hurts. The times of pain, grief and loneliness. And whether or not anyone else sees them, God does. And, just like those mothers, God comes running.

He sees your heart breaking, even when you’re too stubborn to let anyone else, or when you wish someone would notice but they just don’t. God does.

He sees your heart, he knows your pain and he cares. He’s not judging you or comparing you to anyone else or wondering why you couldn’t be stronger, he’s just holding you. Being there.

No matter where you are today, whether your heart is rejoicing or breaking or torn in so many pieces you don’t think you could ever breathe again, you are not alone. God sees your tears, and he’s come running to pick you up and remind you that everything is going to be okay.

Because he’s here, and he cares.

You are not alone.

Posted by Hannah Currie at 13:25 No comments: