There is no Gap! 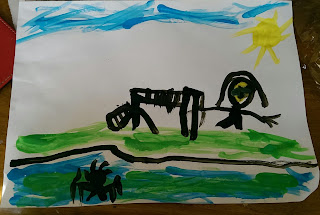 I still remember the day back in Grade One when my teacher got our whole class to stand up, make two lines and march all the way down to the school oval. Given how quietly we’d been sitting drawing before that, I think we were all a little confused. But hey, who are a bunch of five- and six-year-olds to argue with their teacher? (Prep/Grade One teachers, probably don’t answer that!)

She stood us there in a nice line and told us to look at the sky. And then the ground. Then the sky again. And the ground. And more importantly, where the two of them met.

“There’s no gap!” she said, very pragmatically, and possibly with a little frustration. “Do any of you see a big white space between the sky and the grass? No? Then stop drawing one!”

I still think of that moment every time I look at the horizon where the sky meets the earth or sea. And smile whenever I see kids draw pictures with a tiny line of blue right at the top of the page and green right at the bottom with a big expanse of white in between. I still hear Mrs Marshall telling us there’s no gap.

There’s no gap between God’s love and us either.

We might think there is, that something we’ve done has broken the connection or that we were never worth his love in the first place. Truth is, we weren’t, but he loved us anyway.

I know you’ve heard it before, but here it is again just in case you missed it or haven’t heard it lately:

Did you get that? Not just read it or hear it but really get it? Did you let it soak into your heart and worth as a person? God loves you! And not just the person you think is good enough for him but you. As you are.

I know, I know, it’s a simple thing to say and one of the first things you learn as a Christian, but that doesn’t make it any less real, nor any easier to accept sometimes!

Next time you look at the horizon, or smile at a little kid’s picture, let God remind you how much he loves you. From the heavens to the earth – with no gap in between.

Don't Stop at the Picture (When There are REAL Kangaroos Inside) 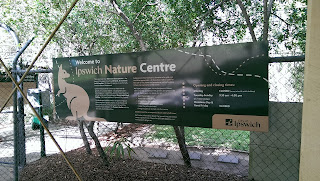 Last week I had the fun and total privilege of hanging out with my daughter’s Prep class at Queen’s Park in Ipswich for the day. Technically, I was a parent helper but I’m pretty sure I had just as much fun as the kids. If not more. We saw a show, played at the park, had a picnic lunch and wandered our way through the Nature Centre saying hello to all the native animals. If you haven’t been to Queen’s Park, you totally have to. It’s amazing!

Free advertising for the park aside – because, believe it or not, that’s not actually what this post is about – I had my eight-week-old with me so didn’t go on the bus with the kids. The two of us arrived twenty minutes or so before the busload of Preppies so I’d have a chance to get him fed and settled before the day started.

It was while I was sitting outside the Nature Reserve that the idea for this blog actually came. And it was all thanks to some little kids whose names I don’t know and who will never know how much they encouraged me.

Given it’s a public park, and the Nature Reserve is pretty much a free zoo, we weren’t the only ones there that day. I watched a few different mums bring their kids to see the animals while I was waiting out the front.

Only it wasn’t actually a kangaroo. It was just a picture on a sign. And not even a photo. Just a drawing. A block coloured outline.

I felt like telling them, “You think that’s a kangaroo? Just you wait. You’re in for an absolute treat!”

See, I’d been there before. Numerous times. I’d walked through the reserve and marvelled at the quolls and lizards, wombats and bilbies, giant black cockatoos and the gregarious emu who walks up and down the fence, making friends with its human visitors.

I’d seen not only the wallabies and pademelons in there but also the real kangaroos. Ten big, majestic grey ones. The picture on the sign might have been in the shape of a kangaroo, but it was nowhere near as impressive as the real ones. 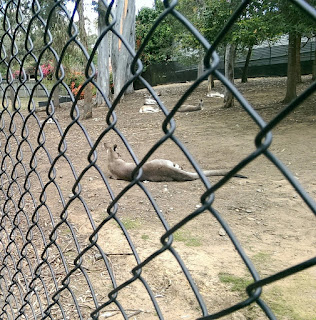 I didn’t see them, but I wonder what those little kids thought when they finally saw the real kangaroos. I’m going to guess they were pretty excited.

It made me wonder how often I come to God thinking I’ve found or achieved exactly what he’s promised me only to have him there, grinning, telling me the same thing I wanted to tell those kids. “You think that’s it? Just you wait. You’re going to be astounded when you see what I actually have for you!”

Those kids probably would have been content with the picture of the kangaroo they spotted. They had no idea how much more was in store for them beyond the reserve’s front gate.

I think sometimes we settle for less than God’s best for the same reason. We see a glimmer and think that’s it, not realising just how much more God has for us.

There’s a wooden walkway that takes visitors around the reserve. Just beyond the front gate are the pademelons and wallabies. Closer than a picture to kangaroos, but still not the real thing. The grey kangaroos are one of the last groups of animals you see.

When it comes to God’s plan for your life and the promises he whispers in your heart, don’t stop at the picture. There’s more. And don’t be tempted to stop at those figurative pademelons or wallabies either. Not when you’re looking for kangaroos. They might look alike or be close enough, but they’re not kangaroos.

Though the walk is long and you might wonder if you’re ever going to see what you’ve been promised, keep going. It’s there, better and more majestic than our little minds could ever imagine.

Listen close as God whispers to you, “Just wait and you’ll see. I have so much more for you!”

And don’t stop at the picture.