Learning to Fall - Lessons from the Wall: Part Two 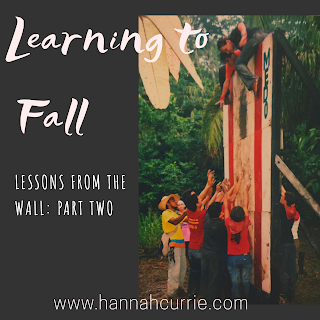 We were in the middle of Brazil, surrounded by palm trees, bamboo and humidity so thick you could touch the water in the air. Our boots were coated in mud, so much so that they looked like platform shoes, and weighed twice what they would clean. Most of us had just as much mud on us, having run through it, crawled through it and fallen into it. But we kept on, knowing that the timer ticked on – and two hundred Brazilian teens and their leaders were watching. We'd been through our own Boot Camp and now were helping run theirs.
We’d been here before – not in Brazil but through Boot Camp’s Obstacle course, even if this one was on the other side of the world. We knew how it worked. We’d done a countoff (this time in Portuguese), climbed a giant ladder, run through tires, crawled through a tunnel made of palm leaves, swung on a rope over water. All that was left was the wall. By this stage, we were pros at this obstacle.
So, hands up, eyes up, we began. First one team member, then another. Over the wall. Someone called my name – “Hannah! You’re next!” – and I pushed to the front, put hands on two teammates’ shoulders and stepped up on their clasped hands, felt them push up and grabbed for the hands of the two guys sitting up on top. So far, so good. There was yelling around me – leaders reminding us to keep our hands and eyes up, the Brazilian teens cheering us on, my own teammates calling out encouragement and advice – but all I was focused on was keeping my mud-coated boots flush up against the wall. Lean back, walk it up. Trust their hold.
And then, I don’t know what happened, whether the humidity made the guys’ hands slip or whether one of my boots did, wrenching me out of their grasp but, almost to the top, I fell.
And, for the time it took me to fall backward two metres, I totally panicked. Actually, panicked isn’t quite the word. More my brain rushed a few thousand times faster than it should thinking through every worst-case scenario it could come up with. Which was a lot given how little time it had.
I was going to break a leg. A compound fracture, of course. In the middle of the Brazilian jungle. Forever away from a hospital.
Land on my tailbone, jar my back out of alignment, partially paralyze myself.
Hit my head on a rock. Lose consciousness. For days.
Crush those beneath me. Wipe out the team.
Silly things. Completely ridiculous now I think of it but fear has a way of making the ridiculous sound real.
Of course, none of those happened. Not even close. I didn’t even get a scratch. Why?
Because my team caught me. I didn’t even hit the ground. And less than a minute later, I was up again, walking up the wall. This time, making it over.
I’d been with that team for almost four weeks already. We’d run Obstacle Courses, done classes, screamed out warcries, worked together, spent two days on a bus and two and a half on planes/in airports, prayed together, put up tents together, washed my hair in buckets and brushed my teeth alongside them. I knew these people. I loved these people. But I never realized how deeply I could trust them – with everything I had – until that day I fell off the wall and they caught me. That moment was such an incredible turning point for me. To trust to the point of letting myself fall. 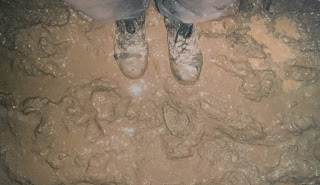 And has been such an incredible challenge to me ever since. One I really hate. One I still fail at.
I hate the feeling of being weak and out of control. I’m pretty sure most people do. I want to be independent and strong and enough. All on my own. I want to have it all together.  I hate it when people see my weakness. I’ve gotten really good at letting people see what I want them to see. Which isn’t weakness. Or if it is, it’s once I’m past it. Once I’ve gotten through whatever it is and can stand proudly and say I did it. I – with God’s help – got through. I’ll accept God’s help – how can I live even a day without him?? – but other people? No, thanks. I’m good. I can do it myself.
Just like a silly toddler. “Do it myself, Mummy.” Yeah, sure.
Want to know something? I’m forcing myself to write this post. Why? Because I haven’t conquered this one yet. I’m not writing from the end, when I’ve learnt the lesson and can encourage you all to do it too. I’m still in the middle. Still failing every day to trust those around me to catch me when I fall. Still struggling hugely to let them even see that I’m falling. Still clinging to control till my fingers bleed.
All these people around me with their hands up, eyes up. All these people wanting to help. Already praying. On my team. Who love me. And here I am, struggling up the wall myself, determined to get up there alone. Clinging to the illusion of control. Too full of pride to let myself fall.
The thing is, I know they’re there. I know God has sent them to help me, but I struggle so much with pushing my pride away enough to let them.
But here’s the thing – and I’m telling myself this as much as I am you reading this – you’re not alone. Maybe it’s time to let yourself fall. Let them see that you’re not okay. Give them the opportunity to bless you. Be there for you. Be Jesus to you today.
It wasn’t climbing the wall which showed me the power of team. I’d done that a few times already. It was falling off it. And having them catch me.
But they didn’t stop there. They didn’t just lower me to the ground and say, “nice try, Hannah, guess you’re not strong enough after all”. The lifted me again. Grasped my hands again. Pushed me up to try again. And this time, I succeeded. Because of them. Because of the people around me.
Like I said, this is a lesson I’m still learning and, with my stupid pride, probably will be for the rest of my life. It’s a tough thing to write about because I know how often I fail at it. But maybe you, like me, need to be reminded that you’re not alone. That there are people around and underneath you who are on your side. On your team. With their hands up and eyes up. Ready to catch you. Ready to help you up again. You can’t do this alone. You were never meant to.

Posted by Hannah Currie at 20:01 No comments:

Hands Up, Eyes Up - Lessons from the Wall: Part One 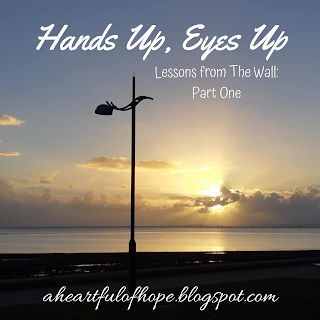 When I was a teenager, I went on a couple of short term mission trips with Teen Missions International, first to Thailand, then Brazil. Talk about life-changing! Both of them were incredible experiences and ones I couldn’t more highly recommend. But, before we got to go overseas, we had to go through Boot Camp.
And, every morning, each team had to make it through the dreaded Obstacle Course (or OC, as it was affectionately, and not-so-affectionately, known). Think big. Team-building to the extreme. Rope swing over a three-metre-long moat. Giant hill of tyres. Rope ladders. More hills. Climbing, crawling, swinging, ducking, running.
And, The Wall.
Ah, The Wall.
The final challenge. A four metre high wall. Straight up, straight down. The aim being to get as many team members over it before the time runs out. The ultimate team-builder. Because there was no way someone could do this one alone.
Picture a bunch of sweaty, tired yet hyped up teens, some (like me) soaked from their daily fall into the moat, looking up at a wall, the glare of the sun in their eyes, yelling back and forth about who’s going up next and how they’re going to get there, cheering each other on. You’d send up the two strongest guys first usually. The ones who, with a boost, could pull themselves up to sit on the top. Then one by one, other team members would get boosted up by those on the ground, reaching high enough to grab the hands of the guys on top and walk their way up. There was many a debate later on as to what was the best method – bracing yourself and walking up or being pulled, monkey grip or hand clasp, gloves or bare hands – but one by one, we’d all go over.
And around it all, the continual cry of ‘hands up, eyes up!’ Over and over. Hands up, eyes up.
Because, inevitably, there would be people who fell, and the last thing you wanted was for them to fall from four metres to the ground. Every team member who wasn’t either boosting someone up, on top of the wall or climbing, had to have their hands up ready to catch if need be and be looking up. It was a safety measure which became our catchcry.
A cry as much a part of the wall as climbing it was.
Hands up, eyes up.
It’s been fifteen years since I last climbed that wall but that cry is still stuck in my head. Yes, because I heard it so many times, but also because it’s become something more since then. A daily, sometimes minute by minute, reminder.
Not to hold my arms up in the air in case someone falls down on top of me (thankfully, that doesn't happen all too often in everyday life!) but to hold my hands up in worship and surrender. Not to keep my eyes on the top of the wall and those climbing it but to keep my eyes on God and what he’s doing. Even when I can’t see from the glare of my own limitations.
Hands up, eyes up. Hands up, eyes up.
To keep my focus not on the mess and noise around me but on the God above me. Not on how tired I am or the fact that I’m dripping wet and wondering how I’m going to find the strength to walk to breakfast, but on the way God has carried me this far and will again. As far as he needs me to go. That he is bigger than my weakness and stronger than my pride. Greater than my plans and wiser than my worries. That God is God and I am not.
Hands up, eyes up.
It’s tough and downright draining keeping your hands and eyes up for a long time. Believe me, I know. Your arms get tired, they burn with the ache. And that glare, so bright your eyes turn to a watery mess. Staying in that attitude of worship and surrender is just as difficult. I want to do it my way. Wallow in the pain. Complain. Point out to God all the ways none of this makes any sense.
But – hands up, eyes up – it’s in the surrender, the tear-filled faith, the choosing to trust, that God pulls us close. Those moments when we look above the pain that we see God.
Hands up, eyes up.