Two Teenaged Girls and the Power of Words 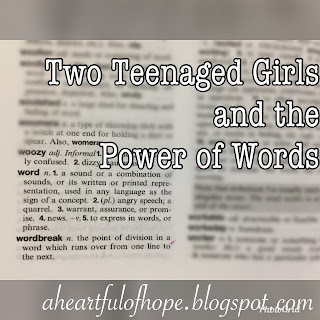 Last weekend I read a book about the power of words. You’d think it was a non-fiction book from that description but no, it was fiction. A Dystopian/Sci-Fi Young Adult book by Patricia Forde called The List, which follows the story of a remnant of people left after global warming wipes out most of the world. Why did this happen? Because people didn’t listen. Warnings went unheeded because words were thrown around rather than used wisely. Words became superfluous, abused.
To save those who are left and ensure such a catastrophe doesn’t happen again, the leader of the remnants cuts down the people’s words to a list of five hundred. If there aren’t as many words to use, people will get to the point faster and be forced to live in the present. (It was a lot more detailed than that but hopefully you get the gist without me giving away the whole story!)
I’d never considered words being what would make or break the world. The whole concept is mind-boggling and yet, I found myself thinking about it long after I’d finished the book. The power of words. The fact that a group of people could be controlled not by taking away their weapons but by taking away their words.
As a writer, I’m incredibly thankful for words. It’s kind of hard to write a book without them. A single word can change a whole story. A particular description, a well-turned phrase (or a terrible one), a sentence that sticks in a reader’s mind and brings them to a place they never dared to go themselves. Word choice is the difference between a good book and an amazing one.
But in real life, words are even more powerful.
And I don’t just mean quote-worthy speeches by powerful people or Bible verses memorized and brought to mind at just the right time.
A simple hello has the power to change a life. Imagine being someone who feels invisible, like everyone passes by you, chatting with friends and fitting in and being somebody. And then one of them turns around and says hello. Someone notices you. Someone reminds you that you’re not invisible. You’re someone.
Sounds crazy but someone did this for me once. Two someones actually.
It was at church when I was a young teen (tween? Late primary, early high school). I was part of a really great youth group with a bunch of other teens my age. We used to meet up every Friday night for fun and/or Bible studies and Sunday nights, during church, sit together for the service. Well, they would. I’d sit with my mum. Kind of. She was involved in the music team for the worship part of the service so I’d actually sit alone for half the time.
Could I have sat with the other teens my age? Sure. But I never did. Mainly because I never quite felt like I belonged with them. I wasn’t quite as cool as them, didn’t quite have the right clothes or outgoing personality, spent more time reading than chatting about boys, etc. You get the idea. The usual teen stuff. For whatever reason, I felt on the outer. There, but not there.
But, despite this, there were a couple of girls (the coolest ones there, in my mind J) who’d walk all the way down the front to where I sat every week by myself and invite me to sit with them. I can’t remember ever saying yes but they still kept inviting me. And it meant so much to me. To know that I meant something. That, despite their coolness and my un-coolness, they noticed me and cared enough to ask if I wanted to join them and be part of their group. Thinking about it now, it seems so shallow and silly and honestly, it probably meant nothing to them to ask but to me, an insecure young teen girl, it meant everything.
Simple words. “Want to sit with us?” Life-changing moments.
Words have power.
Not just big words that change the world but the little ones too, the ones that change individual’s worlds.
“You matter.”
“You are enough.”
“I love you.”
“Come and sit with me?”
“Thankyou.”
They’re so simple. And yet…wow.
Have you ever considered the impact simple words can have? They’re so easy to throw about and yet have such power.
I loved reading The List. It was a great story. But I love even more the way it reminded me how thankful I am for words and the power they have. Something I won’t be taking for granted any time soon.
So, who can you encourage today? You don’t have to have any big words or anything truly profound to say. You’d be amazed how much a simple, ‘I appreciate you,’ can mean to someone. Go for it!

Posted by Hannah Currie at 22:58 No comments: 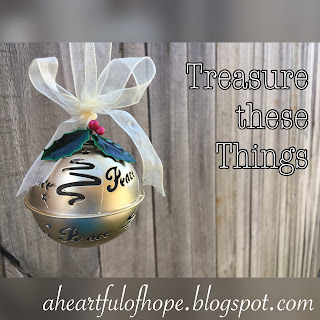 Christmas is coming. It might be only October but already plum puddings and decorations are filling the stores. Which is great. At least, every other year I would have thought so. This year, for some reason, I just about had a panic attack in the middle of Woolworths three weeks ago (in September!!! Don't they usually wait until after Halloween???) when I saw them. Yep, one little plum pudding had me waging a silent all-out war to keep my heart and lungs from fleeing the scene as I stood there clutching my trolley like the lifeline it was.
I love Christmas, I really do. I love the fun, the traditions, the joy, the food, the decorations in every store, the music, the lights, the wonder of finding a king in a stable, the fun of finding just the right gifts and wrapping them as I sing along to my favourite carols... Basically, everything about it. I'm one of those people who wander up and down the Christmas aisles at the stores purely for the delight of it and put my Christmas tree up in early November because I love how beautiful it looks - and may or may not have a couple of sneaky Christmas decorations up all year round...
It’s not Christmas which has me freaking out. It’s the fact that it’s coming. And I’m not ready. Give it two months and I might be. Maybe. Probably not. I just feel like this year is moving way too fast. Faster than I can keep up with. Like if I close my eyes even for a moment, years will pass. I want to hold on, stop the world spinning for a few hours and just breathe.
Anyone else with me there?
It’s hard to slow down. Even harder to actually stop.
Funny that Christmas, the one thing I’m trying so hard not to think about right now, might just hold the answers to my problem. I know, Jesus is the answer to everything (unless it’s Abraham :p) but this time, it’s Mary.
Specifically, the way she stopped. Took time to treasure the moments. The Christmas story mentions a couple of times that she did it. After angels sent the shepherds to visit her new little family… ‘but Mary treasured all these things and pondered them in her heart’ (Luke 2:19), and after she lost Jesus as a child only to find him in the temple… ‘but his mother treasured all these things in her heart’ (Luke 2:51).
I’m no expert on the culture of that time and maybe it means something different but when I read that, I see Mary stopping, closing her eyes and capturing the wonder of it all. Reliving it in those minutes before she falls asleep at night. Thanking God for the privilege. It’s purposeful rather than something that happened by accident. She chose to treasure them.
It didn’t happen by chance. It was a choice. To stop, to sit in wonder, to treasure those moments.
Yes, Christmas is coming. Yes, time is passing way faster than I’m happy with. No, there’s nothing I can do about it.
But I can make the choice to stop. To listen. To treasure these moments. The hard ones, the impatient ones, the times when injury forces me to stop and the times I walk in wonder through parks filled with more beauty than any human could ever create. It’s a choice.
It’s hard to stop, especially going into the crazy busy season which is coming whether we like it or not, but like Mary, I want to treasure these things. Not rush through them be purposeful about cherishing them. Noticing them. The moments.
For me, that means making a list now (yep, in October) of what I need to do for Christmas so I can start thinking about it now rather than them all piling up in December (sidenote, did you know you can write Christmas cards in October??? Crazy! :p But, believe it or not, the whole world doesn't blow up if you get them done early. Why have I not thought of this before???) and being really intentional about making space to rest and/or just sit (and refusing to feel guilty about it). Already the stress is feeling less since I've sorted out Christmas cards and end of year teacher gifts.
I don't know what it'll look like for you - maybe being more prepared, maybe being less, maybe doing less or simply being more intentional about what you do do - but I challenge you to find a way, before it gets totally crazy, to treasure these things.

Posted by Hannah Currie at 18:10 No comments: