How Many People Does it Take to Fold a Double Sheet? 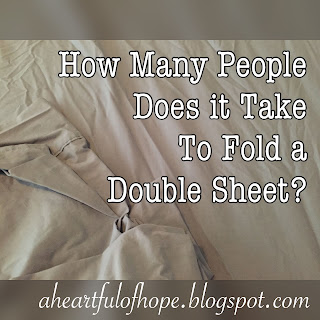 How many people does it take to fold a double sheet?

One, it turns out.

Okay, so clearly I’m really slow but it took me waaaaay too long to realize a person could fold a double sheet (or even a single) on their own. I know. Slightly pathetic (and no, I’m not telling you exactly how long but you’ll be happy to know it was before I got married :p )

See, when I was little, Mum would always get one of us kids to help when she was folding sheets or blankets. We’d take one end, she’d take the other, we’d meet in the middle, take the new ‘end’, and so on until it was folded. I had no idea it could be – and usually was – a one-person job.

It was one of those crazy moments of blow-your-mind revelation when I realized. Not so much because I could suddenly fold all these sheets on my own without having to go find my mum or a sibling as it was the fact that Mum had let us help – valuing it even – even though she didn’t need it. In fact, it probably would have been easier to do it on her own.

But she didn’t. She let us help. She spent that time with us. She taught us skills we’d need to know for the future (okay, so I slightly missed the point of the lesson but I did learn that sheets needed to be folded rather than scrunched in a ball and thrown in a cupboard so that counts).

God does that too. He lets us help even though he doesn’t need it.

God is all powerful. He’s all-seeing, all-knowing, all-everything. He created the universe with a word.

That person needing encouragement? God could encourage them without me. He could make a whole garden full of their favorite flower bloom overnight without even a seed being planted. He could send a rainbow, an angel, a vision. Believe me, he doesn’t need to use a bumbling human who’s just as likely to get the message wrong as right.

That person needing church? God could do get them there without me. Easily. He’s picked up people from one place and put them in other cities before. Sent churches to people. He made that person’s brain, it would be simple for him to plant a yearning in there for church. He doesn’t need me to shakingly invite them.

He could teach our kids about himself without us ever saying a word. He could heal the sick without us praying over them. He has multitudes of angels worshiping him day and night, he doesn’t need us to write worship songs either.

But he wants us. He lets us help! He invites us in. Lets us make mistakes and bumble our way through his work because he cherishes that time spent with us. Because the process is teaching and growing us and he absolutely delights in that. Even though he could do a much better job himself.

There’s this line in a Casting Crowns song that I love (which sums it up pretty well (sorry, you could have saved yourself some time and just read their lyrics!))…

God wants you. And yes, he knows you're not perfect. He knows you'll make mistakes, sometimes chicken out and occasionally miss the boat altogether. But he’s not asking for perfection. Just you. Your willingness to help. To spend time with him. To walk with him and be his hands and feet. To pray. To join in what he's already doing every day.

How many people does it take to fold a double sheet?

Just one. But how much better the relationship when it’s two!

Were they really worth the Ransom? 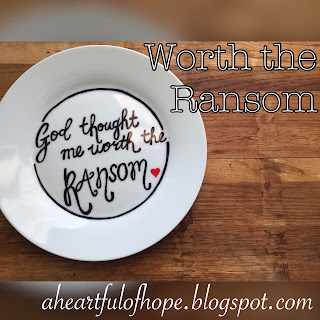 You don’t negotiate with terrorists. Anyone who’s ever watched a kidnapping movie or tv show or read a suspense book knows it. I’m not entirely sure if it works that way in real life but in fiction, that’s it. No negotiation. No paying the ransom. You find another way, you send in a rescue team, you sacrifice one for the good of the whole (thankfully not too often in romances!) but you never ever give in to the bad guy’s demands. That’s just how it works.
And everyone knows it.
Except Jesus, apparently. He missed that memo. He paid the ransom.
Not just part of it either. He paid the whole thing.
This struck me so profoundly one morning in church last year that I started crying. Thankfully, no one saw or I would have had a hard time explaining it, especially since I was so overwhelmed I couldn’t talk.
We were singing Amazing Grace, the Chris Tomlin version.
My chains are gone. I’ve been set free
My God, my Savior has ransomed me
It was that one word which got to me. Ransom.
Maybe I’d been reading a suspense novel, maybe not, I can’t actually remember but for some reason I couldn’t get past that word and the reality of what it meant. How much I was loved.
Jesus didn’t negotiate with the bad guy. He never considered whether I/we were worth it or not.  He just paid the price. The whole price. He didn’t need to. Honestly? Nice a person as I think I am, I wasn’t exactly worth it. His life for mine? The all-powerful, all-knowing, all-everything God in exchange for me? Ha. Not even close to a justifiable exchange. Seriously, I’m not putting myself down here, it’s just reality. Not an even swap. Not worth the ransom. If it had been world leaders deciding, they wouldn’t have picked me.
But Jesus did. He didn’t think twice. He looked at me and thought me worth the ransom. Every bit that was asked. Everything he had to give.
Crazy. It makes no sense whatsoever.
But…wow. Talk about humbling.
Before I was born. Before I’d done anything worth anything, he thought me worth it. Worth going against every bit of logic and paying it.
I came home, wrote it on a plate and put it up on my shelf to remind me, every time I start doubting my worth, that, though the world doesn’t pay ransoms, Jesus does. And he thought me worth it.
He paid it for you too. He thought you worth the ransom.

Love Like my Aunt who ate a Vinegar Cake 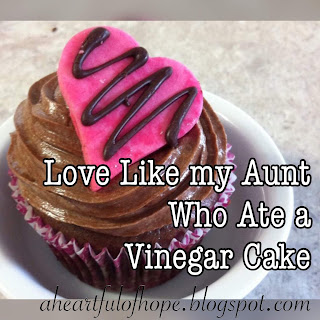 I’m a good baker. Cook, not so much (I mean, do people really have to eat a different meal every single night????? Come on. Couldn’t we skip dinners altogether? Have cereal for dinner? Every night?). But a good baker. At least, most of the time. Amidst the cakes I’m incredibly proud of are a few whopping disasters. And my vinegar cakes would easily top that list.

To be clear, I didn’t mean to make vinegar cakes that day. They were supposed to be chocolate fudge. I’d been craving a piece of chocolate fudge cake and my family has a totally foolproof recipe (ha! ummm...) which tastes amazing so I pulled it out. (Should probably mention I was about ten at the time – and had made this recipe dozens of times.)

I have no idea what my brain was doing that day but I somehow mixed up the milk and vinegar. Instead of curdling the three cups of milk with two tablespoons of vinegar, I mixed two tablespoons of milk with three cups of vinegar and poured it in. I remember thinking vaguely that that seemed weird but checked the recipe, assured myself it was right and kept going. Like I said, no idea where my brain was!

I wouldn’t have even noticed the mistake except I got a bit of mixture on my finger while I was pouring it into the baking tins and licked it off. Ewwwwwww! Seriously. It was gross. Looked exactly right, tasted so horribly wrong.

Needless to say, I threw the whole batch of mixture out. Well, most of it. The part curious, part impish part of me cooked six cupcakes thinking they’d make a good practical joke. And believe me, they looked good. You totally couldn’t tell from a glance that there was anything wrong with them.

As no doubt you can tell from the heading, my aunt was the poor unsuspecting person we (yep, a brother was in on the joke by now) foisted the vinegar cupcake on. It seems so mean now but we thought it was hilarious at the time.

We told her we'd made a special cupcake just for her. She thanked us and stood there, eating that cake like nothing was wrong even though with each bite her face got a little more scrunched up with the pain. I was trying so hard not to laugh that I had tears running down my face while my brother was quite literally rolling on the floor laughing. Honestly, I thought she’d take a bite and spit it out. (I certainly would have!) I was wrong. She ate the whole thing. Every single disgusting crumb.

We, of course, asked how it was. She said it was nice. We gave in and told her it was vinegar (as if she didn’t know). She said she thought it tasted a bit strange. I asked why she’d eaten it then, our joke kind of falling flat by that point, especially when she answered.

“Because I knew you’d made it and I didn’t want to upset you.”

At the time, I thought she was kind of ridiculous. I mean, did she really think I thought it tasted any good?? But now, all I can think is how much she loved me. She ate that entire vinegar cupcake. For me. Because she didn’t want me to be sad. Because she didn't want to discourage my baking skills. Because I’d asked her to and she didn’t want to disappoint me. Because that’s what love does.

I want to love like that. The people who bring their own vinegar cakes, be they difficult attitudes, annoying timing, things that just grate against me the wrong way... Not because it’s easy, practical or even nice for me but because I love them and I want them to know. Because they matter. Because it's what Jesus does every day for me.

I want to love like my aunt who ate an entire vinegar cake, not because it tasted any good but because she loved me. 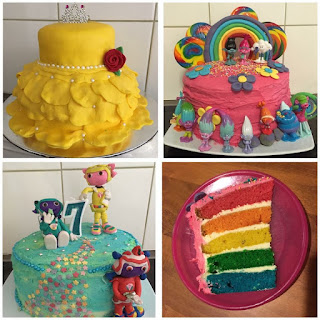 PS. I realised as I was writing this that I talk a lot about my baking failures (here, and here, and a bit here...). Here are a few of my wins just to prove I can actually bake :p 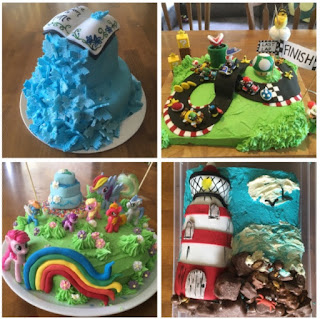