Friday was Never the End 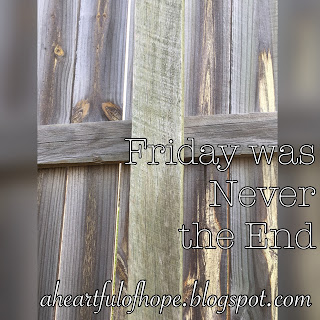 Growing up, I thought the musical Jesus Christ Superstar was anti-Christian. Of course, that opinion was purely based on the reviews of others and the two songs I knew from it since I'd never actually seen it.

Last year, I borrowed it from the library, thinking it was probably worth making the decision for myself.

Maybe it was the version, maybe the passion of the actors cast, maybe the musical itself, but I was absolutely blown away by it. I cried, I raged, my heart was broken, I was challenged, and - scandalous though it may sound - I felt as if I truly understood the significance of Easter for the first time.

I think I waited a whole day, if that, before buying a copy for myself. Jesus Christ Superstar: The Arena Spectacular. For those who haven't seen it, it's a musical portraying Passion week, told primarily through the eyes of Judas, Jesus and Mary Magdalene.

I watched it again last night and was once again ripped apart by the same emotions.

Jesus spent three years absolutely pouring himself out into these people and they still didn’t get it. They missed the point of Jesus’ words, life and sacrifice altogether.

There’s a line Jesus sings in the musical when he’s begging God to take away the pain that’s to come. “I’m not as sure as when we started. Then I was inspired, now I’m sad and tired.”

Jesus was exhausted. I kind of wonder if he could have kept going as he had for longer than the three years of his ministry. The long days, heart-breaking time spent with people, calming storms, dealing with pain and suffering and mule-headed disciples. ‘Sad and tired’ seem like an understatement. Did he feel like a failure? Or did the knowledge of the future beyond the cross fuel him when the reality of what was wrecked him?

Have you ever given everything of yourself and had people not only not notice but completely miss the point? It’s usually around about then that we give up on them. They don’t appreciate it. They don’t get it. I’m wasting my time, we think. I wonder if Jesus ever thought that about the disciples and the crowds around him. He gave them everything he had and still they looked at him blankly. No one would have held it against him if he’d just walked away.

Jesus didn’t give up. He gave everything anyway. Before we appreciated, understood or even wanted his sacrifice, he gave it. For us.
Jesus would have forgiven Judas.

Jesus forgave Peter. He forgave the guards and Pilate and the people who condemned him. He would have forgiven Judas. He probably already had. Jesus didn’t give up on Judas, Judas gave up on himself. He gave up before giving himself the chance to accept God’s grace. He died never knowing the end of the story.

This wasn’t the end of the story.

The musical finishes with the cross, not the resurrection. The first time I watched it, that was my one issue with it. I wanted more. I wanted to scream at all the people watching that that wasn't the end! There was more to the story! Jesus came back to life!!

But, watching it Maundy Thursday, that unfinished-ness took on a whole new significance. That's what it must have felt like for the disciples and Mary and everyone on the Friday. They walked away from the cross utterly devastated. They thought that was it. Jesus was dead. They didn't know there was more to the story. They didn't know that, just around the corner, was Sunday. The best bit was still coming. Jesus' death wasn't the end.

It was only the beginning.

And it's only the beginning for us too.
Posted by Hannah Currie at 22:20 No comments: