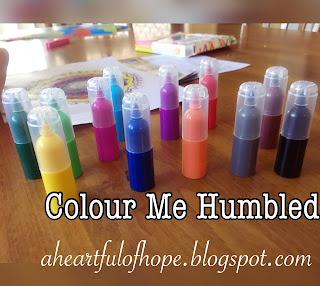 I’ve never been a fan of colouring in. I was that kid back in grade one who got told to use more than one pencil to colour a picture. Seriously. It happened. I have to smile when I watch Prep kids do it these days because, yep, that was me. I really had no interest in colouring.
Nothing much has changed. I still don’t like it. I’ll do it, on occasion (once or twice a year, always while sitting chatting with kids) but it’s not something I find relaxing nor am I any good at it. Believe me, if you want something coloured beautifully, ask my sisters. Not me. They can shade and everything.
So, when an author I follow on Facebook came up with the idea of getting her readers to colour a Scripture-based colouring page each week as an exercise in stillness and contemplation, I balked just shy of opting out altogether.
I loved the idea – people across the world focusing on one particular verse each week while colouring a page and sharing at the end of the week what God had taught us through it (and the page, if we were game), but the actual colouring? Um, no. Especially when I saw the first week’s page – an incredibly detailed mandala. Not sure what would have given in first, my eyes or my arthritic hands. Nope. That went in the ‘nice idea but too hard’ basket. 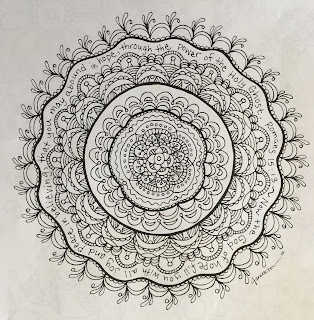 Enter my seven-year-old daughter, who saw the page sitting on the bench and asked if she could colour it.
And, four hours later, handed me the finished product. Yep, for four hours, she sat at our dining room table and coloured every single detail of that page. Using every single pen she had. Where I looked at the page and thought it too hard, she saw the potential and spent the time making that black and white shell of a design a rainbow of beautiful colour. 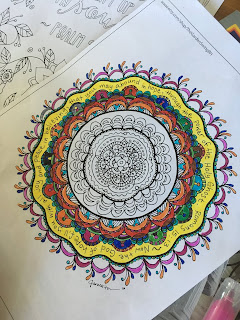 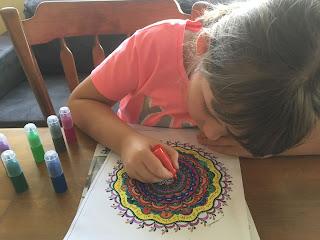 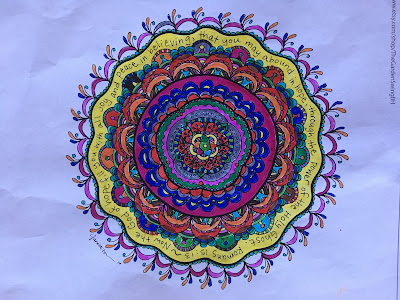 I might not have coloured that page, but God did speak to me through it, and her patience. In those four hours, while she sat there colouring, I saw a picture of God’s heart for us.
I look at my life sometimes and put it in the too-hard basket. Others’ lives too. We’re complicated people. I see the potential for beauty but getting to that point? Nope. Too hard. Too painful. Too long a journey.
But God sees something different. He sees the beauty. Right from the start. And yes, though it’ll be a long, complicated journey – in which he’ll probably get hurt and have us mistake his intent in the process – he wades right in to our mess and starts making something of it. It’s not too long a process for him. It’s not too difficult.
He doesn’t rush over the details either, like I’m prone to do (hmmm…how many things can I colour purple? Oh look, those can all be green, those too. More trees? Green, green, green…). He pulls out each one – every dot, every line, every swirl – and makes them beautiful.
God is patient. Even more so than my daughter. He’s not rushing his work in our lives, wanting to move on to something more important or getting bored, he’s patient, wanting to bring out his best in us even when we can’t see it.
We’re not too hard for him. Nor too complicated. Nor too broken. The things that overwhelm us? They don’t overwhelm him. He’s big enough, powerful enough, gentle enough and patient enough to deal with them.
I don’t know about you but I find that really humbling. That God would care that much about me as to not find my messiness overwhelming. That he would want to delve into the complications of my life and not just look and walk away. That he would love me that much as to want to be part of my mess. That the God who commands planets and thunder and universes beyond my imagination would think me worth taking the time to make beautiful.
Wow! Colour me humbled. 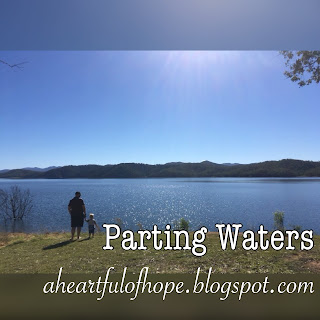 Instead of writing my own post tonight, I wanted to share with you a song that’s been a huge encouragement to me this past year. I love the imagery of it all and the reminder that God is working in ways we’ll never know to answer the prayers our hearts ache to see realised. He’s not a passive God, sitting there, listening to our desperate prayers, saying ‘oh, that’s nice.’ He’s working – for us, in us, through us, around us. He knows our prayers before we pray them and is already at work to see them through.

God is faithful. So, so faithful. He hears your prayers, he sees your heart, he wipes away your tears. He’s on your side. He’s moving mountains. I hope this song encourages you today too. (Listen to it here, or the lyrics are below)

You’re parting waters, making a way for me
You’re moving mountains that I don’t even see
You’ve answered my prayer before I even speak
All you need for me to be is still

You’re parting waters, making a way for me
You’re moving mountains that I don’t even see
You’ve answered my prayer before I even speak
All you need for me to be is still

You’re parting waters, making a way for me
You’re moving mountains that I don’t even see
You’ve answered my prayer before I even speak
All you need for me to be
Is still

Posted by Hannah Currie at 19:38 No comments: