GOD IS: Part One 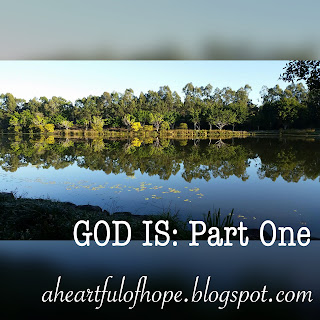 GOD IS: Part One

It was late. Early actually. Somewhere between two and three in the morning. I’d been up for a couple of hours already with my little one and was getting to the point of being ridiculously frustrated. He wasn’t upset, just not sleeping. And I really wanted to be. Giving into the frustration I felt and crying would have meant having to get up to get a tissue so that was out of the question (I’m practical like that :p) so instead, I distracted myself with a word game I play. It’s called ‘go through the alphabet and think of something ___ starting with each letter’. The blank is filled in with a topic – girls’ names, colours, foods, TV shows, etc.

Likely because I’d already been talking to God for a couple of hours (part praying, part grumbling…) but I decided this time to make the topic ‘attributes of God’. What started as a game though quickly became an amazing time of worship as I put words to who God is to me – from A to Z. I challenge you to do it yourself sometime.

I thought I’d share with you my list over the next few weeks in a series of posts. May it remind you of what an incredible God we serve.

So, without further ado…

There were lots of words I could have listed for A – able, Adonai, amazing, alpha. I chose always. I love the reminder that God is the same forever. He’s been around forever and will last far longer than me. If he’s made a promise, he will always keep it. The God he was way back thousands of years ago talking with Job and Isaiah is the same God he is today. His promises don’t change and neither does he. God is always.

Hebrews 13:8
Jesus Christ is the same yesterday, today and forever.

This might seem a strange adjective to explain God but you only have to look at creation to see its truth. Majestic mountains, crashing waterfalls, striking sunsets, the sun rising over waves at a beach, the delicate wings of a dragonfly, a newborn baby’s tiny hands and feet, a sleeping child (hey, I was hoping! :p), the velvety smoothness of a rose petal, a billion stars in the country sky, the wrinkles on a ninety-year-old’s hands, the way music sounds, the colours on a rainbow… God made every one of those things and every single one of them is part of who he is. God is beautiful.

Psalm 19:1
The heavens declare the glory of God; the skies proclaim the work of his hands.

The first thing we ever learn from God in the Bible is that he is creative. I read that in a devotional lately and, as a writer and creative person myself, that really resonated with me. That desire in me to create? God gave me that. He understands it. God created the world and all we see but he went further than that. He created the things we don’t see – animals we’re still discovering, emotions we don’t know how to express, relationships so beautiful we can hardly believe they’re real. God made bugs that glow and a human body so intricate that there are still parts of it scientists don’t understand. He creates beauty from ashes and kings out of shepherds. I struggle to create fictional worlds that make sense :) God is truly creative.

Genesis 1:1
In the beginning, God created the heavens and the earth.

I forget this one sometimes, or maybe I just try not to think about it. I’ve known God all my life and feel so comfortable in his embrace that I forget he’s a dangerous God. He is more powerful than I could ever imagine. The Old Testament is full of stories of God wiping out people with a single word or throwing down fire on nations. People couldn’t even look him in the eye because it would kill them. I get so caught up in the fact that he is love that I forget he’s also dangerous.

Genesis 32:30
Jacob named the place Peniel (which means “face of God”), for he said, “I have seen God face to face, yet my life has been spared.”

This one’s hard to explain except for this – if you took God out of my life, no one would recognise me. I would be a completely different person, if I was even still alive. God is absolutely everything to me. My reason for getting up each day, my strength to get through the day, my hope in a future day, my joy, my peace, my greatest encourager and the one who reins me in, the giver of all I have. God truly is my everything.

Psalm 139:7-10
I can never escape from your Spirit!
I can never get away from your presence!
If I go up to heaven, you are there;
if I go down to the grave, you are there.
If I ride the wings of the morning,
if I dwell by the farthest oceans,
even there your hand will guide me,
and your strength will support me.

So there you have it – part one of my GOD IS alphabet. Do any of these resonate with you? What aspect of God would you list for the letters A to E?

Coming up next - Part Two with the letters F to J. Any guesses what they'll be? :)